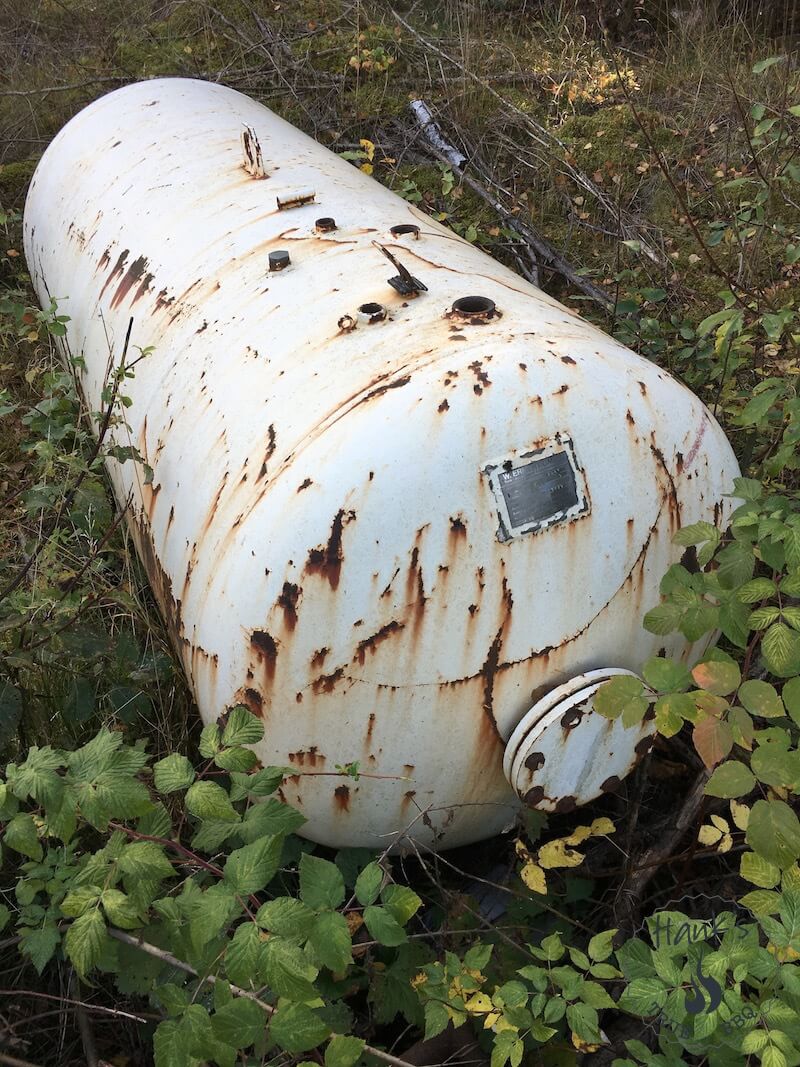 Building your own bbq smoker is a large undertaking. You need access to a proper shop, or at least a welder and a grinder, plus some other tools.

You can either build everything from scratch, or use old/used parts that you can find lying around. I chose to build a so called offset smoker, where you build a fire in one box, and place the food in another (named the food chamber).

This post is written as the build continues, so keep reading for some interesting turns during the construction.

There are a lot of smokers built already, and there are tons of models. Both ‘ordinary’ smokers as well as reverse flow smokers. I’m a big fan of the ordinary smoker. The air and smoke should travel straight through without stalling. That’s why I share the same thoughts as Aaron Franklin when it comes to smoke stack size. There should be a good, uninhibited draft. I want an insulated fire chamber to minimize weather affecting the fire. The connection between firebox and food chamber should not be welded, this is to minimize conductive heat transfer between the two. This will help avoid setting fire to the grease. The food chamber should be angled slightly so all fat and grease is drained quickly and not catch fire. If it does, it will have a negative impact on flavor.

There is a lot of discussion on smoke stack placement. I belong to those who mount the smoke stack at center level or below, to avoid having the hot air travel all the way at the top of the food chamber and never touch the meat. As for creating a relatively even temperature throughout the food chamber, the firebox to food chamber opening is critical.

I found a suitable (?) tank close to a forest, and contacted the owner. He gave it away for free if I arranged for transporting it. This one was made in 1975 and measures 39 inches in diameter and is 90 inches long. It is built to withstand 15.6 bar pressure (all according to the sign), so I’m guessing it hasn’t been used as an oil tank. It weighs a ton, so I need a crane to move it. 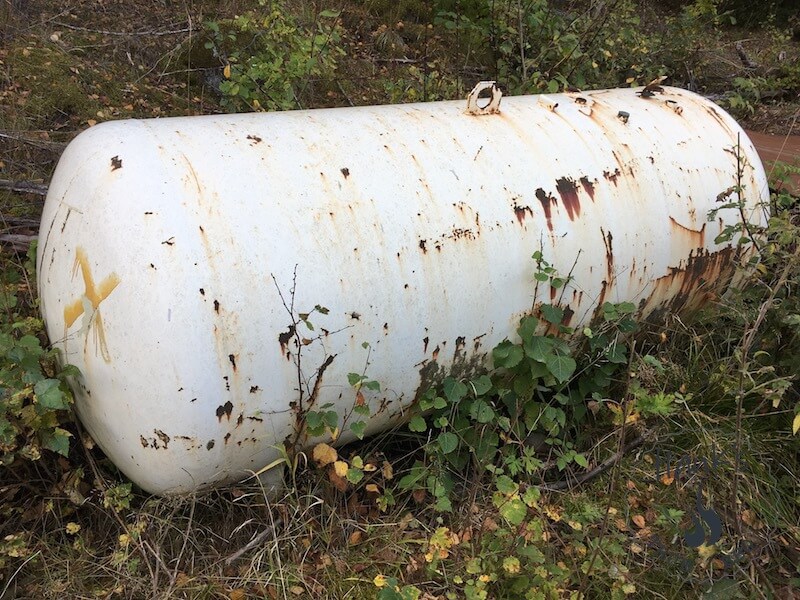 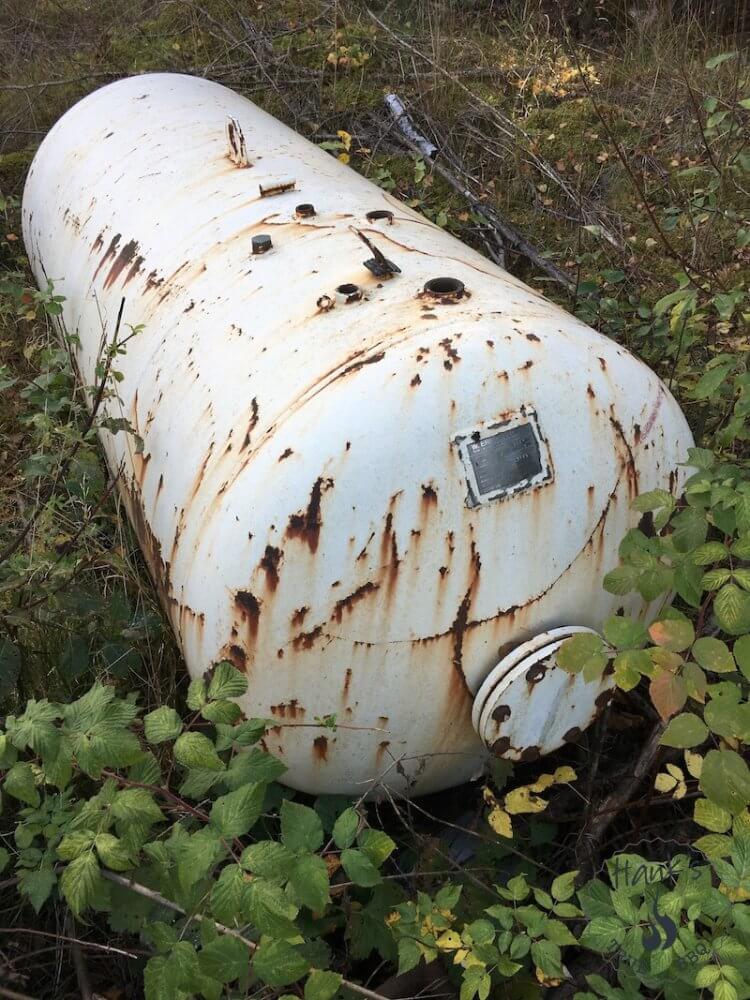 Old and used tank shot from another angle 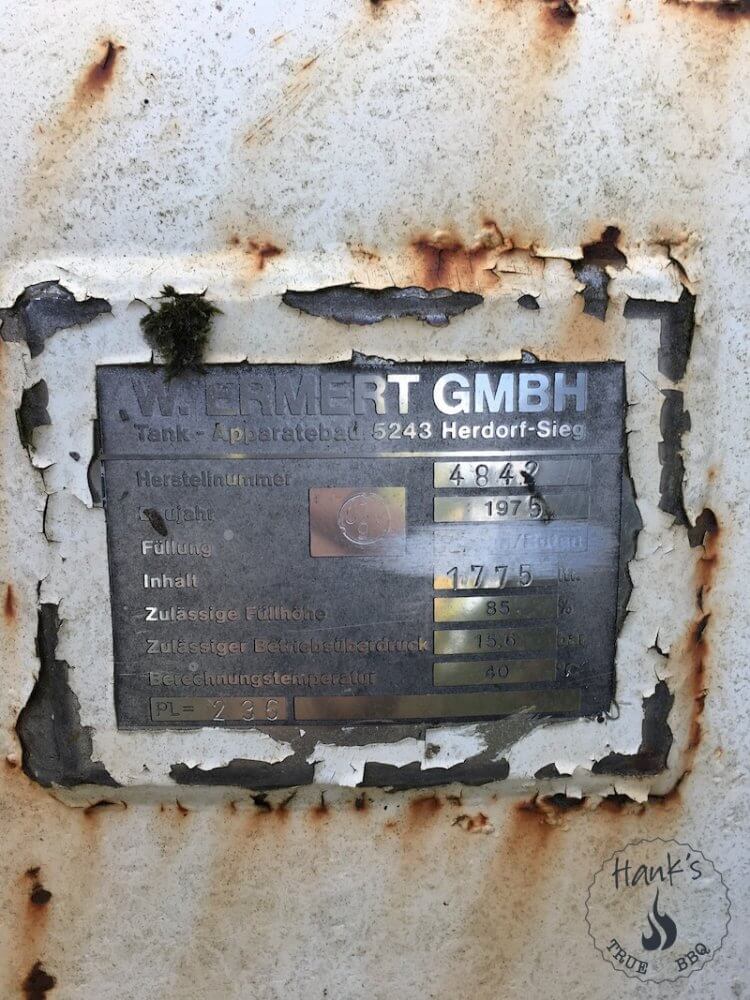 Fabricating the other parts

So, given the tank above I need to fabricate the following:

I have decided to make a rectangular (as opposed to round) firebox since it will be easier for me. I have also decided to build two boxes and place one inside the other. This is to provide insulation, there will be a 1 inch air gap between the inner and outer box. The reason for this is to make it less sensitive to rain and wind, as well as making it more energy-efficient.

I have made it 70 centimetres long, and 60 by 60 centimeters wide/tall. That translates into 27.5 inches long, and 23.5 inches wide/tall. I made a model using cardboard first, it was a lot quicker and cheaper for prototyping. The size is slightly less than 1/3 of the main chamber, recommended by Feldon’s pit calculator. 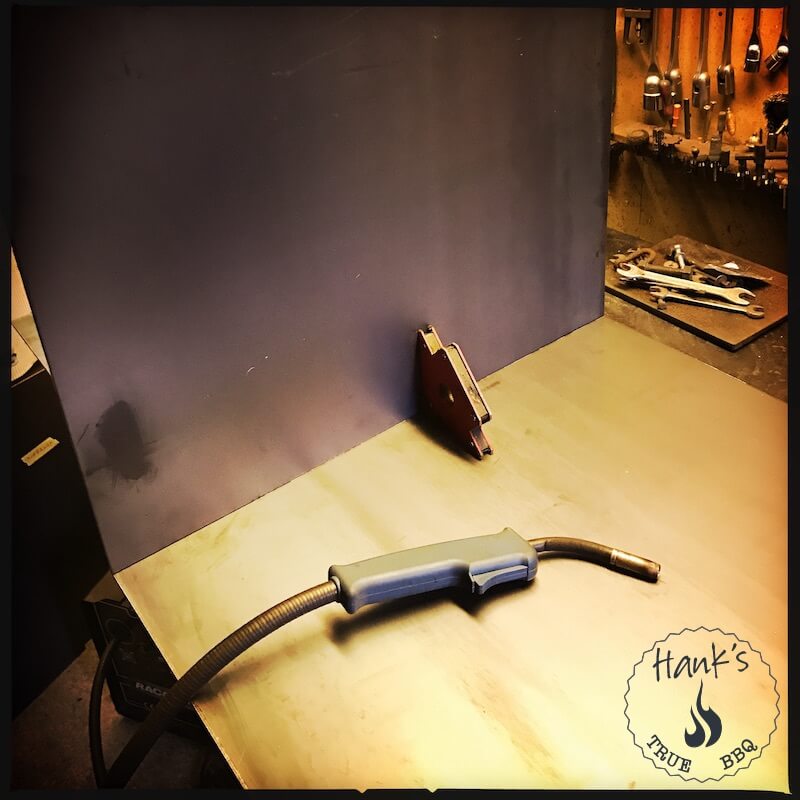 Getting those angles right 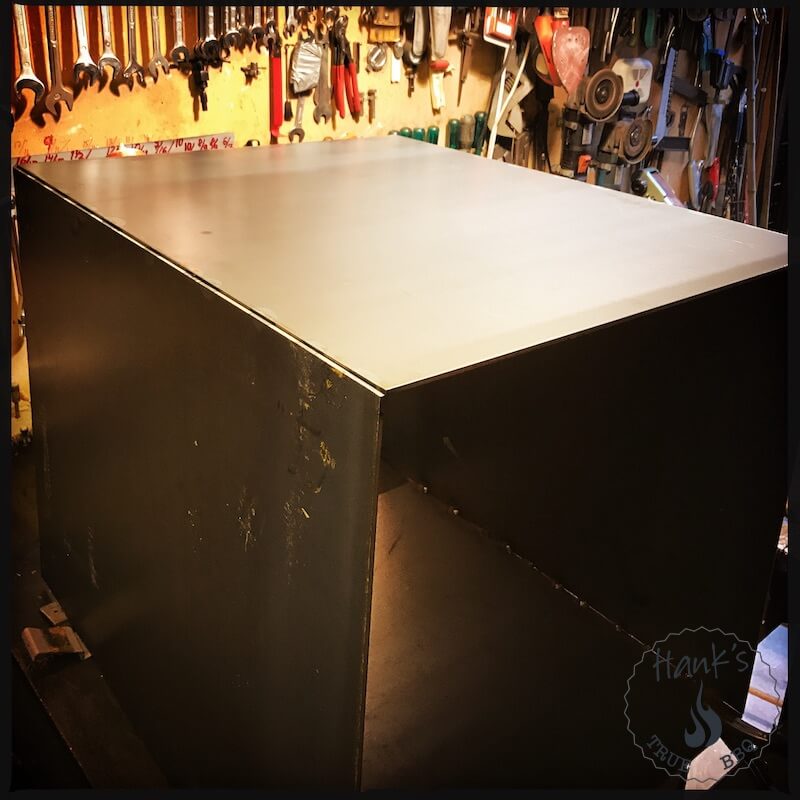 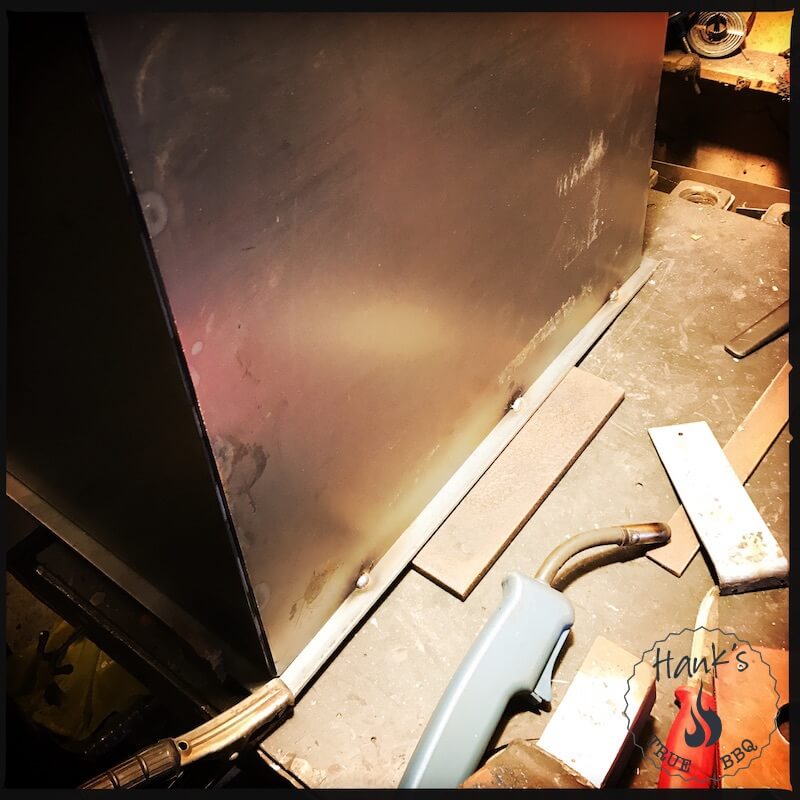 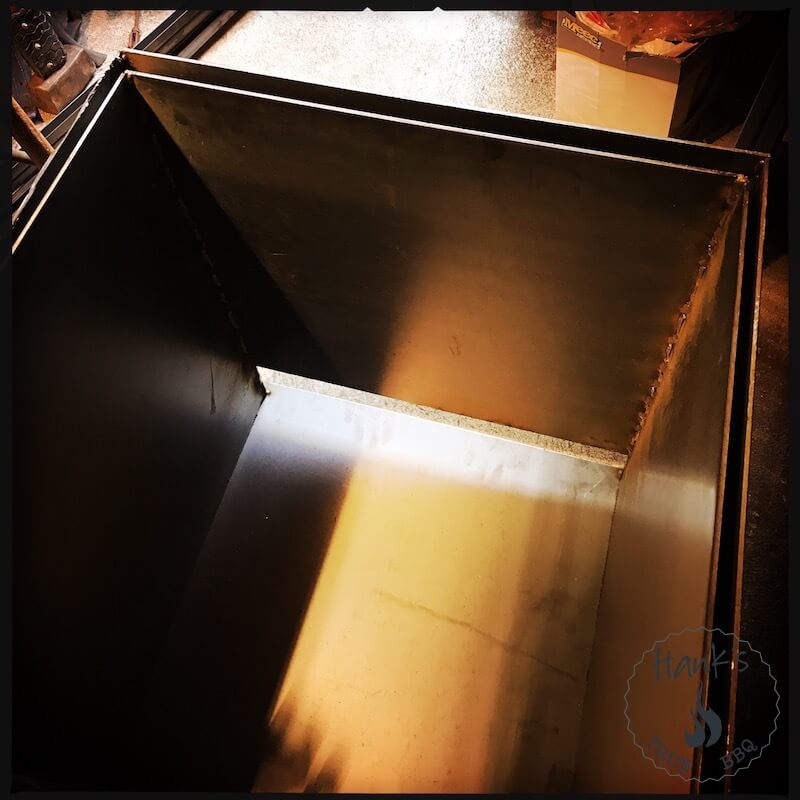 I want a large diameter chimney for proper draft. Better draft means better/cleaner burning of wood, which in turn affects smoke flavor. I initially planned to make it out of ordinary steel, but it was hard to find pipe of that dimension whose walls were still thin. They were around 3/16 to 5/16 of an inch thick for an 8 inch pipe, which would make it ridiculously heavy. So I switched and used stainless steel pipe instead, which was available in the sizes I wanted. Many thanks to Göinge Rostfria for help with this! 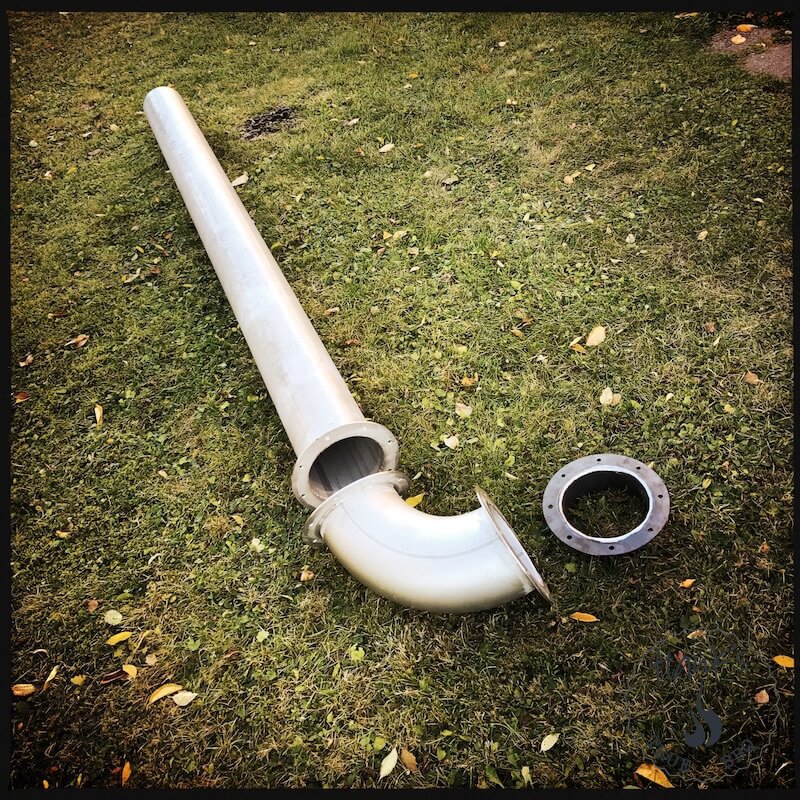 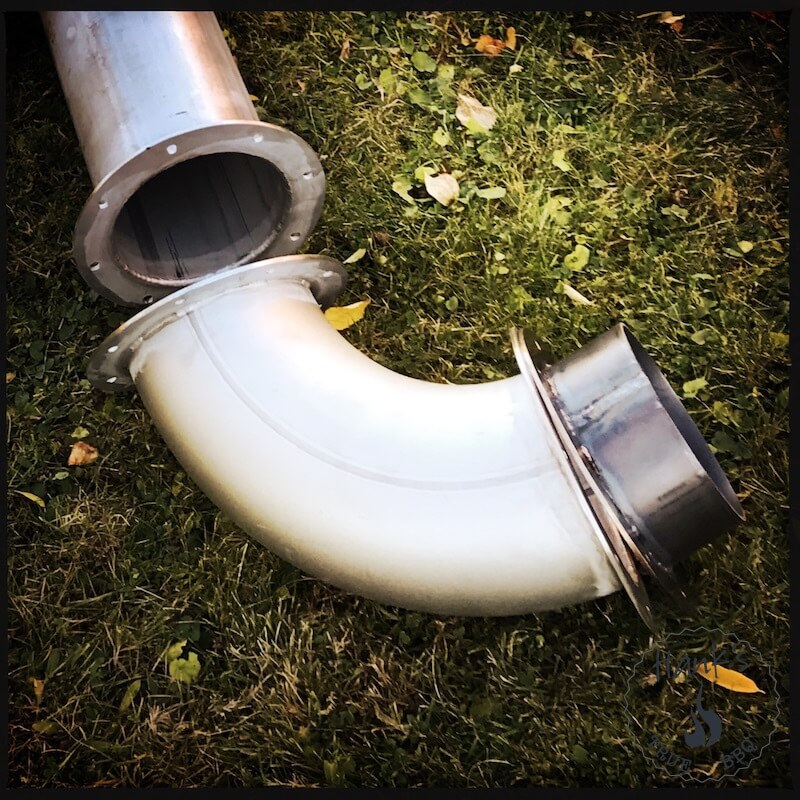 Since the main tank probably weighs a lot, given the pressure it was made to withstand, I figure the stand must be sturdy. I decided to use square pipe, measuring 2×2 inches. I made 6 ‘legs’, pointing upward, to support the weight of the tank. The whole frame is 150 cm (59 inches) long and 80 cm (31.5 inches) wide. I also added reinforcements to all legs to be on the safe side. 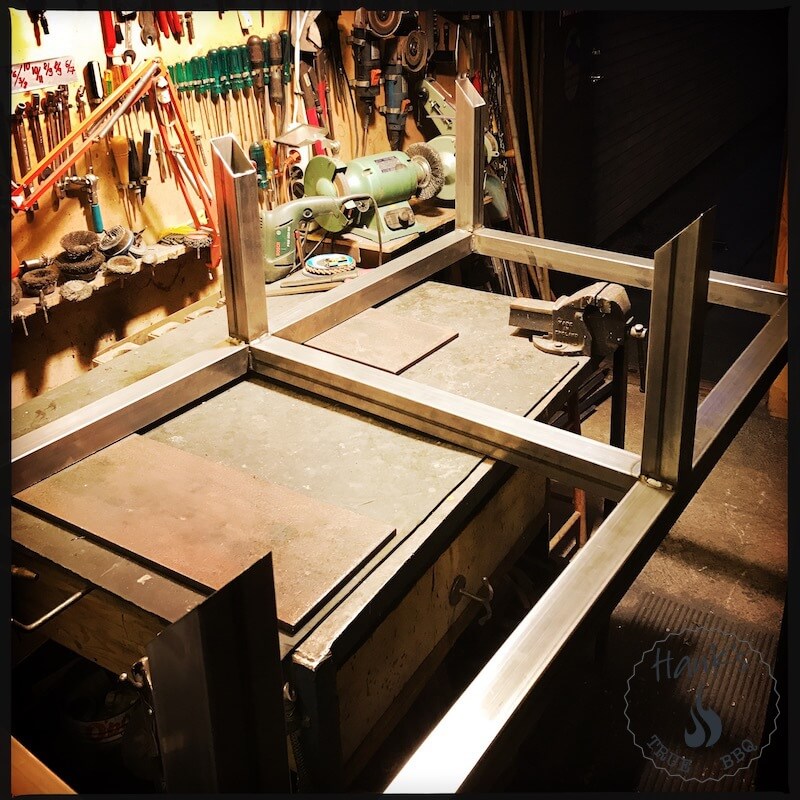 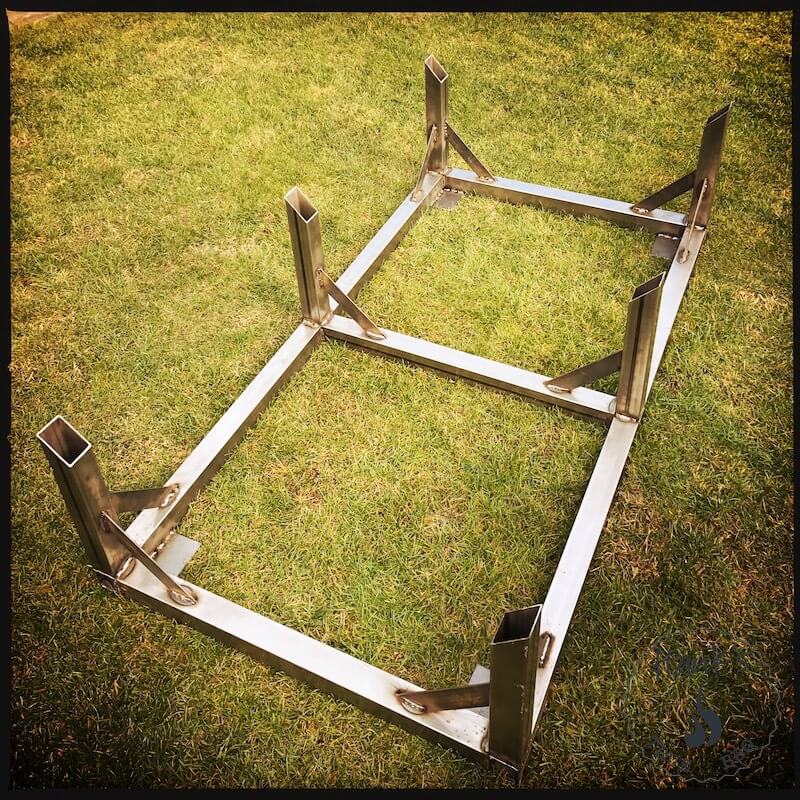 Read more in part II of this series.

Grilling a Tomahawk on the Parrilla